Interview with Luke, a returning customer 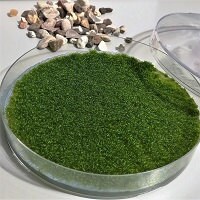 Luke has purchased his first fragrant moss during the early days of 2019. Since then Luke has returned with good tips and posts about our fragrant moss Mossebelle, and we regularly consult Luke for new ideas. Thus, this interview was established to let the world know a little more about how to work with fragrant moss.

Q: You shared this picture below, what is this, looks a little like a cube-moss or maybe a cupcake? 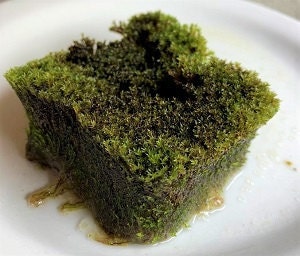 Picture from Luke, thanks.

Luke: This moss is one of my solar-powered air fresheners. I originally bought it in the petri dish where it is growing on a thin layer of agar. I then transplanted it to a square glass and after a year, the agar layer is gone, but the moss is the size of a cupcake!

Q: You said you received it in a petri dish, what did that look like, and how did you work with it.

Luke: Yes, well let me just explain a little more. This is cutting-edge science, where fragrance-producing genes are inserted into a moss so that the moss constantly produces a pleasant smell, as well as oxygen. Thus, when you get it, it comes directly from the laboratory, and they naturally use petri dishes (see below). I keep it on my work desk as a novelty item, and let the moss mature and settle in the dish before using it in terrariums and likewise. 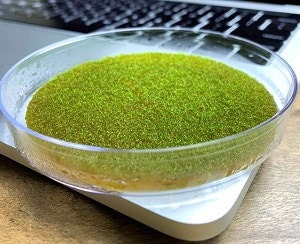 Picture from Luke, thanks.

Q. Is there any care required for the moss?

Luke: The moss grows best with around PAR of 30 to 100 PPFD, which means indoor lighting works very well, but full direct sunlight is too intense. Otherwise just mist it with water so it does  not dry out. I will suggest you read this for care instructions. The petri dish was more sparse than pictured here when it arrived. I kept it sealed under good lighting for a few weeks before opening it up to let fresh air in. So, the thickness of the green growth improved since it arrived.

Q: So, you got the DIY kit. Can you actually smell it if you’re not intentionally sticking your nose next to it?

Luke: I bought two DYI kits. Each DIY kit comes with 2 petri dishes of moss, so in my tiny home office, I have 4 petri dishes, and they generate enough scent to make the room have a faint scent of the moss. I have them under 16 hours of light per day. Under less light, they'd generate less fragrance. At the level of my small home office, the scent is not overwhelming, but faint in the room when I keep the door closed, which is nice. If I stick my nose in it, it is a strong scent. The fragrance that is produced is a natural plant molecule and it dissipates quickly if I move the moss out of the room and open up the door. So, it is more subtle than the artificial air fresheners, which can overwhelm a small enclosed space with a bunch of aromatic chemicals that build up in fabrics in the room such as your clothing.

Q: So what do you know about this moss, and can you change agar?

Luke: The seller of this moss has their name on peer-reviewed scientific research that describes exactly how this moss is made. Here is one such publication. Also, I grew one of the petri dishes in a square-shaped jar for a year (see the picture), then removed the moss layer from the agar and transplanted it to fresh plain agar that I made myself. The agar I used has no scent, and once the moss became established on the new agar, it was clear that the moss produces the scent. The picture is at the top, this is after 1 year of growth, during transplanting. It took on the shape of the jar I grew it in. I can assure you that this moss definitely produces fragrance over a year after receiving it and removing the agar it came growing on.

I prefer the patchouli scent because it is the stronger of the two and better matches what I’d imagine moss smelling like.

Q: But what if it escapes into the wild. Will the entire world then have a nice fragrance?

Luke: This genetically modified moss grows slower because it wastes a large part of its metabolism on producing a fragrance that is pleasant to humans, yet yields the moss no benefit in the wild. So, I’d expect this moss to struggle to survive in the wild, as the wild mosses would out-compete it.